Conservation efforts are being made to preserve diversity and rare bloodlines!​​

With only 7% Diversity, 2 Matrilines and 2 Patrilines: one of each  being extremely rare, we believe it is vital to protect the 2 rare lines for the future of the breed.  While still health testing, hip scoring, annual eye examinations and DNA profiling , we are working on a breeding programme that will see these lines expanding back into the very limited gene pool.
We are sending our dogs DNA to UC Davis, USA, for diversity testing and Betterbred diagnostic tools.  This ensures that our mating selections will contribute to the genetic diversity of our breed - which equates to longevity and health.

WHAT IS A MATRILINE?
"A matriline is a line of descent from a female ancestor to a descendant via a line of females. A matriline can be drawn from todays females all the way to the females of the foundation stock: from daughter to mother, grandmother, great-grandmother and so on.
Mitochondria are the power plants of the cell: They supply cell with energy.  In addition to that, mitochondria have their role in regulating the cycle, growth and death of cells.  In a Matriline, the mitochondrial DNA (mt DNA) has descended from a mother to a daughter.  Males also inherit mtDNA from their mother, but they cannot pass it on.  Offspring inherits mtDNA always from the mother, and the genes of the father do not affect mtDNA in any way.  If the matriline is broken, the mtDNA of that line is lost.
There are only two matrilines left among Swedish Vallhunds.

WHAT IS A PATRILINE?
A patriline is a father line, or a sire line as it could be called in the dog world. A patriline is a line of descent from a male ancestor to a descendant via line of males: a sire, his sire and his sire, and so on. Males Y chromosome descents in the patriline.
Out of these 13 patrilines, 11 have died out

Today, there are only two intact patrilines: Mopsens and Tjappos.   Tjappos line is hanging by a thread. If Tjappos patriline disappears, there is only one version of chromosome Y and the DNA it contains left in the breed"
Credit: Halla Seppala, Konnunkoden Swedish Vallhunds (Finland)

Breed Diversity testing done through UC Davis, USA and in conjuction with Betterbred Diagnostics, we are able to identify Internal Relatedness as well as the rare haplotypes, along with a multitude of genetic information for each dog, pairing and breed for diversity, health as well as retaining the characteristics of the breed through careful puppy selection.

Several years ago Team Vallhund New Zealand worked with Massey University NZ to create the first Genetic Diversity test for dogs worldwide using the Swedish Vallhund. Since then the test has been picked up Internationally, refined and used on a wide range of breeds including another two further tests performed on the Swedish Vallhund.​ 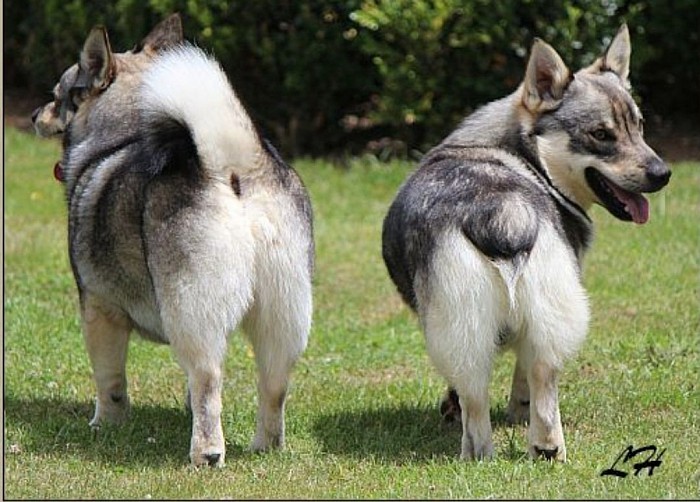